It’s been a while since I’ve posted anything on the the site.  The last 15 months have been pretty eventful.

We had to put my poor, sick Hobbes (the ginger thug) down back in October of 2016. After a decent interval, two new cats joined the household: Baxter and O’Malley.  In December of 2016, Dorothy and I and the boys took a trip to NYC – something Dorothy had been wanting to do for a long time. In 2017 we did a couple of long overdue house projects, and I continued to paint.

I’ve also rediscovered the joys of fountain pens and pen brushes. This past couple of months I’ve been doing a bunch of quick drawings of the cats (and other things), mostly with some different brush pens.

My favorite pen brushes are the Pentel Arts Pocket Brush Pen, and the Kuretake Sumi Brush Pen (both available at Amazon, and better art supply stores), but I also have cheap Chinese models I use as well.  Once the initial cartridges run dry, I refill them with bottled ink and a syringe (using permanent light-fast ink). 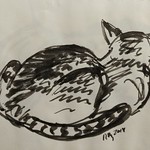 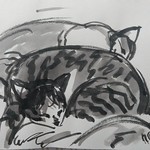 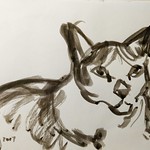 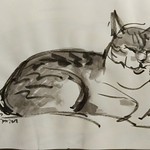 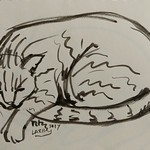 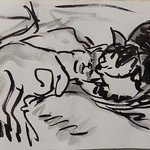 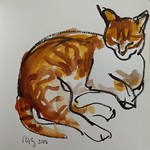 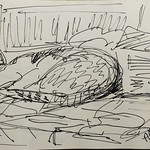