Once upon a time, I liked coming up with what I considered at the time “clever” titles. I aspired to have them be poetic, quirky, enigmatic, witty. At the time I was painting these big abstract color field paintings (this was circa 1974). 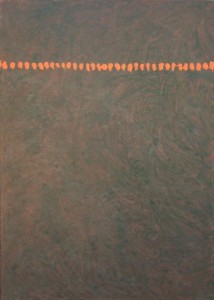 Sample title from my undergraduate days: “Possessing not the dancer’s grace, I turn instead to wine.”

Oh I loved that title. Better, it must be confessed, than the actual piece I’d assigned it to.

I’m not sure I can say why those big abstracts had the long flowery titles. It probably had most to do that I was 20. Best answer I can come up with, anyway.

Since then I’ve reached the point where if I could name every single thing “untitled,” I would.  Barring that, I now give the shortest descriptive title I can come up with, drained of every ounce of connotation I can squeeze out. “Why?” you may ask.  My friend Kipp Baker in fact called me out on the fact that when he’d ask what my art was about I’d give (what seemed to him) these evasive, non-replies that seemed to avoid his question altogether.

My art these days is pretty representational. There’s also a strong narrative thread that winds in and out of most of what I do.

I think of these as being like a single page out of the middle of a book – they tell a story, but not from the beginning and without an ending.

When I was a kid, I loved comic books. They are one of the things that got me started as an artist, and I’ve drawn comics as a kid, as a teenager and as a college student. I think of these paintings a little as single loose pages out of a comic: I want the viewer to find those pages and be forced / be allowed to come up with how the story began and how it will end.   And every one who sees them will write the story in their own way.

When a tender grad student, I started painting all these goofy, jokey things. The great Vernon Fisher, one of my instructors, said, “These are all like one-liners. And once you get the joke, who gives a shit?”

The point was – if you tell people exactly what the painting means, you’ve robbed them of the opportunity to become engaged in the creative process. And it is the viewer who ultimately finishes the work. The artist is the first viewer, but he’s not the only viewer, and certainly not the last.

So,  back to my dislike of titles.

I want my titles drained of all context, connotation and certainty. If you tell the viewer what something “means” or what it’s “about” by saying too much in the title, they’ll walk away thinking there’s only one ending to the narrative.

I want you to write a new story every time you see it.